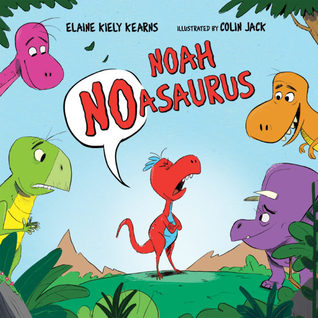 Today, I’m THRILLED to feature my first “Preschooler-Approved Picture Book” review. And, there’s no better book to start with than Elaine Kiely Kearns’ debut, NOAH NOASAURUS (illustrated by Colin Jack), which will be published on April 1st (no fooling!) by Albert Whitman Company. 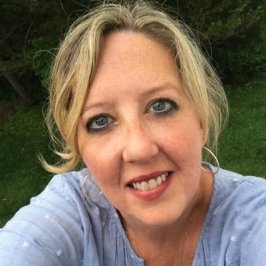 Elaine is graciously giving away a SIGNED copy of NOAH NOASAURUS to one lucky reader. For a chance to win, comment below or retweet this post from my Twitter handle (@kateallenfox) by Friday, March 8th.

So, what is a preschooler-approved picture book?

My preschooler is a certified book monster–gobbling down every book he can. But, he finds some books tastier than others. This is the first post in a new series where I’ll profile books that receive his highest seal of approval: endless begging for seconds.

I’ll tell you what he likes about the book and what I like about it as the person who reads it umpteen-and-a-half times a day.

Before we dive in, here’s a quick synopsis of the story:

Noah Noasaurus woke up feeling very No. No to brushing his teeth. No to eating breakfast. And definitely No to playing with his little brother. Things only get worse when Noah goes for a walk and relentlessly cheerful Toby Rex, Brian Brontosaurus, and Ava Ceratops follow him. Together, the group starts a bona fide dino parade that even Noah can’t resist. This lighthearted, whimsical story will have readers laughing along at Noah and his friends—as well as at their own bad moods

When NOAH NOASAURUS landed in my inbox, the kid-appeal was evident at first click. Let’s start with the obvious: dinosaurs. Now, my kid isn’t particularly into dinosaurs (trucks are more his jam), but I’d be hard-pressed to find a child under 5 who is anti-dinosaurs.

Colin Jack’s colorful and inviting illustrations make the most of this perennially popular topic. Noah and his friends are so visually appealing that, despite Noah’s titular grumpiness, I’d invite them in for dinner before even thinking of running away in terror.

The upbeat visuals marry perfectly with the delightful story that follows Noah as he tries to stay in a bad mood, despite the warm support of his family and friends. Small kids are able to follow the story due to its preschooler-friendly word choice and brisk pacing. The narrative arc is also wonderfully applicable to kids in the 3–5 age range, who often find themselves wrestling with their own emotions.

But, what my kid LOVES most about this story is right in the title: the NOs! The repetition of the simple word “no” gives him the opportunity to identify a word. He feels like an active participant in the story’s creation. And, let’s be honest: the kid loves a parent-sanctioned opportunity to yell “NO!”

So, why do I love this book? For many of the same reasons my kid does, but from a slightly different angle. I love that:

NOAH NOASAURUS fires on all cylinders for preschoolers and their grown-ups, and I’m certain would appeal to older kids as well. Heck, I still wake up feeling very “no” a few times a week.

Learn more about Elaine and NOAH NOASAURUS on her website. You can see other reviews and find pre-order info on Goodreads.

Let me know in the comments what makes your favorite picture book particularly kid-friendly. And, don’t forget to enter the giveaway for a SIGNED copy of NOAH NOASAURUS by commenting below or retweeting!

Have a book that you’d like my book monster to devour and review? Send me a note through my contact page!